I began work on this project confident that I knew quite a bit about the Holocaust. I had read books and I had seen a lot of documentary films. Now having worked in this area for years, I realize that the experiences of the survivors are more varied than I would have imagined, and they are often miraculous.

I have been given a great gift to work with Holocaust survivors; I continually draw sustenance from their inner strength. I think anyone who works with them must feel that the tragic part of their own lives falls into perspective beside the losses that the survivors have experienced.

My method of working, which leads me to go back again and again for clarification, has helped me to feel a part of their lives. I am happy that I now have a big extended family. I can truly say that what has motivated me to keep on persevering with this project has been my personal relationships with survivors. Without this personal element my motivation would have run its course by now.

When I was growing up I remember one questions that was always asked about survivors: Why did they go to their deaths like sheep to be slaughtered? Now I can think of so many more questions that should have been asked then. It was a time when those who did not experience the Holocaust found it to be a subject that was distasteful, and they did not want to be reminded about it. And the survivors then were reluctant to discuss such fresh and painful topics.

Now, new generations have been born who have no personal connection to World War II or the Holocaust. Tragically, new slaughters have been visited on the helpless, innocent people in this world. Yet, I believe that the Holocaust was unique: It was born out of a malevolent ideology that distinguished between human life worth living and sub-human life fit for the ovens. Sadly, there are people today who believe this. I think we need to educate our children about this so that they will not be vulnerable to these hate mongers.

It gives me a great sense of accomplishment to be writing this statement knowing all the work that has been done to present these survivor stories to you. I have so many people to thank; you know who you are. 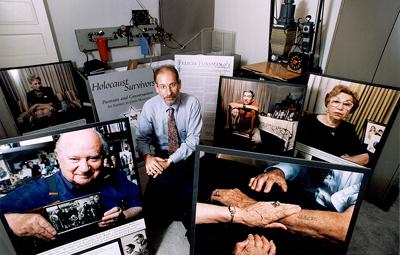 "It has taken on a life of its own," says John Menszer, Project Director of the Holocaust Survivors website. What began in 1993 as an idea for a photography project has become a touring exhibit and website. Mr. Menszer has traveled around the country photographing and interviewing survivors.

"You have to really love this work," he says, "because the emotional commitment is enormous." "You are entering into a part of people's lives where there is a reservoir of pain, and they are often reluctant to go there. You have to support them in their efforts to tell you their stories."

His interest in the Holocaust began at an early age. As a child of 10 years old Mr. Menszer was particularly shocked by seeing the film Mein Kampf which showed scenes taken in the concentration camps. Then in 1972, his mother began to interview survivors for a living history project of Brandeis University Women's Committee. Her moving descriptions of these interviews stayed with him.

Mr. Menszer, who has a master's degree in philosophy, went on after an involvement in his family's real estate business to become an attorney. Yet he has always devoted time to his interest in photography. It was at a photography seminar that the idea of making photographs of Holocaust survivors came to him.

"The problem for the photographer is to capture something that shows that they were involved in the Holocaust," he says. "My original idea was to photograph them holding family photos. I was so naive, I did not realize that most of them lost everything."

He settled on the idea of photographing the survivors in their own homes as they were telling him their stories. "This is because you have the best chance of capturing emotion when someone tells you a story for the first time. If you have them repeat it when you are ready to take their picture the emotion is never relived with the same intensity."

Mr. Menszer found a sponsor for his project in Jewish Community Center of New Orleans and obtained financial support from the Louisiana Endowment for the Humanities, as well as other community sources. Mr. Menszer plans to continue photographing and interviewing Holocaust survivors. His one regret is that as the survivors are getting older there is little time left.

The Patrons Roll of Honor

We Gratefully Acknowledge Our Donors For Their Dedication and Support

Keepers of the Shoah

Guardians of the Legacy